DNSW and Supercars’ media units work hard to portray the event as a ‘win’ for any city.

They never acknowledge any negative impacts and continually talk up economic figures and benefits, even when these have proven to be false. No mention of disparaging remarks from successive Auditor-General reports….just how GOOD the event is.

And the event IS good for Supercars!

But not for local councils, local businesses or local residents. These are the groups that bear the considerable costs of the event. Add to that the environmental losses incurred and the crowding out of all other community events that must relocate for the months that the precinct is off-limits.

In the case of Newcastle, the council lost badly when it signed a secret service deal handing all power to Supercars. Uncapped funds were pledged to Supercars for resurfacing the track each year and rehabilitating the park and precinct damage incurred at each event.

The list of adverse impacts is long. But the glossy brochures and upbeat media statements will never allude to them. The company is king! Collateral damage is just part of waging the corporate war. Communities and local businesses are the casualties…they don’t rate a mention in the statistics.

Loss of income for businesses

There was significant loss for Newcastle businesses due to access problems, traffic congestion, road changes, loss of parking, loss of amenity and noise. This was during the 6 months construction phase, the 10 week bump in and bump out phase and during the event itself. In addition, many local businesses rely on residents as their clients. Without the regular trade of locals and city workers, they found themselves with no customers.

Forced closure of many businesses

The Federal Courts and the local High School were obliged to close for the Friday of the event. Some businesses closed for several weeks prior to the event. They were unable to operate due to noise, road closures and lack of parking. Many chose not to open during the three days of the event knowing that access for customers was almost impossible.

Supercars did pay for some residents who approached them with doctors’ certificates, or went through the local MP, but in general claimed it was an individual choice whether to leave the precinct for the event. During the second year, Supercars refused to pay relocation costs for most who applied-even those living trackside with small babies. Families who would not expose their children to the noise, disruption and pollution had to pay to relocate.

The circuit passes through a heritage precinct with homes up to 130 years old. These are very vulnerable to vibrations. Because of the need to fast track the construction work, intense vibration rolling was done on the roads, causing considerable damage to a number of houses lining the track. Most of these houses are still awaiting Supercars insurers to contact them. Other houses further from the track were also damaged but had not received dilapidation reports so cannot prove the damage was done by the construction work or the event.

Supercars announced that it would provide earplugs for those who had applied for accreditation. Earplugs are completely unsuitable for the elderly, babies and toddlers and those with understanding of how they must be worn. Many people who chose to stay and protect their properties, had to buy expensive, properly fitted headphones that would protect them during the 8 hours of racing each day.

Many residents put their pets in pet boarding establishments for the duration of the event. For elderly pet owners this is an expensive and distressing by-product of the race.

Many Newcastle East primary school students could not attend school on the Friday due to difficulties getting to and from school, or because their families moved out for the event. Newcastle Grammar closed on each of the Fridays due to access issues and noise.

Those with home businesses found it impossible to function during the event. Noise, vibration and fumes made working from home untenable.

Supercars have the final say on work approvals in the race precinct. Some properties had previously arranged for building work and repairs to be done. These owners were refused permission to scaffold or begin work on their homes until Supercars had vacated the precinct at the end of December. Many could not begin the building work until March or April due to the Christmas/New Year holiday break. Delays in building led to increased costs.

WHAT IS THE COST?

CoN must resurface racetrack every year

Motor racing events through residential streets are notorious for hiding their costs. Supercars has a history of hiding the costs of the event to taxpayers and ratepayers and grossly exaggerating the benefits.

From 2000 – 2003, Canberra spent $16 million on the Supercars event. However, this didn’t include the hosting fee (estimate another $1.5 million) plus the considerable costs of promoting the event, nor some of the operating costs because these were too well hidden. No costs were disclosed by the government agency responsible for bringing the Event to Canberra. Like Newcastle council, the ACT department only produced an economic impact statement. Costs that were eventually recovered were only obtained through the agency’s auditing process.

Hamilton in NZ ended up costing ratepayers about $40million over 5 years, of which at least $3 million was in unauthorized expenditure. However, once again the auditor revealed it was difficult to get all the costs because responsibilities between various agencies were unclear. Like Newcastle, there was confusion created to inhibit auditing. Because of the ratepayers’ outcry over the costs that were known, Hamilton council managed to get rid of Supercars after 5 years.

When the Auditor-General reviewed the Supercars event after the first year of the Homebush event, he noted that this event was not a good investment of taxpayer funds. Post-event analysis indicated that costs were more than planned and that economic impacts less than estimated, resulting in a budget blow out. The original grant to fund the event was $30 million, which blew out to $45 million. Instead of getting rid of the event however, the NSW government ignored the recommendations of the A-G and extended their option to continue for another 5 years. They finally got rid of them after 3 years, but only by giving them more funds to build a circuit in Newcastle. The amount given for the Newcastle event by NSW government remains unknown.

The costs to Newcastle ratepayers for the Supercars event have never been released, although hosting fees were reported in the Newcastle Herald as ‘about’ 2 million for 5 years. However, NERG chased freedom of information through NSW Civil and Administrative Tribunal to reveal 2 pages of operating costs to be paid for by ratepayers including the upkeep of roads and the rehabilitation of the city’s parklands. In February 2019 NERG got some idea of just how extensive these operating costs will be.  Zaara and Scott Streets had to be dug back up and another layer of bitumen rolled. Parnell Place had more track work to repair and the surface improved. Wharf Rd and Horseshoe Rd, including the hairpin bend, also had to be extensively repaired.

200 trees had to be chain sawed by council under the direction of Supercars and council was responsible for replanting an ‘urban forest’. The Foreshore park seating had to be removed and replaced each year, new pathways constructed and the overall park re-designed. Entries into and out of the pit facilities had to be paid for in Wharf Road, and part of James Fletcher Park was removed to widen the entrance into Bathers Way.

Other roadwork done by council was said to be ‘works brought forward’. This in fact, is an additional cost because the renewal of roads and services before their due date, cuts short their use-by-dates.

Council spent an outlandish amount of money promoting this event. Glossy brochures were produced continuously, to give the event a positive spin in response to criticism. A dedicated Supercars site on Council’s website had to be updated and maintained. Council staff were seconded to provide consultation with residents and to sit on various committees. Council staff members were assigned to field enquiries and complaints about Supercars and to provide answers to hundreds of emails related to the race. Other services paid for by ratepayers included: traffic planning and parking, removal and replacement of all road markings, street signs and traffic signage and extensive storage for Supercars equipment and the services required by these facilities.

Council also held a VIP/charity function at Fort Scratchley on the Saturday of each event. It is now known that the 2017 and 2018 VIP functions cost ratepayers $94,000.

Additionally there was a $3.7 million tip fee for contaminated waste. Low levels of coal tar and asbestos made it unsuitable to recycle. It is unclear how council came to be responsible for this cost under the deed agreement. 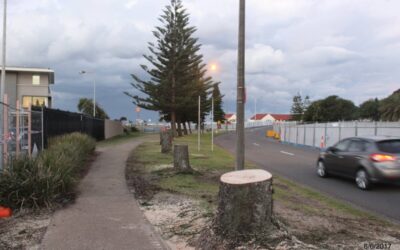 City of Newcastle (CoN) and especially the Lord Mayor, repeatedly state that the small number of trees replanted in the Foreshore Park since the mass tree removal for Supercars will create 20 times more usable shade. This claim is RIDICULOUS since more than 240 trees...

END_OF_DOCUMENT_TOKEN_TO_BE_REPLACED 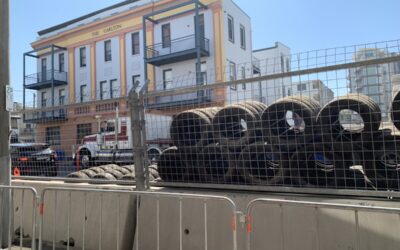 The Juggernaut Effect of Motor Racing

How and why are those most impacted by motor racing events excluded from the planning process? What tactics are used by the promoters to limit and manage contestation and what avenues are open for community resistance?

END_OF_DOCUMENT_TOKEN_TO_BE_REPLACED 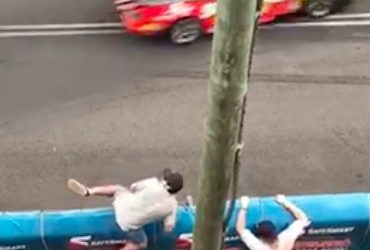 Despite an outrageous conflict of interest in licensing the Newcastle track, both DNSW and CoN continue to tell the public the circuit abides by the safety criteria specified by CAMS.

END_OF_DOCUMENT_TOKEN_TO_BE_REPLACED 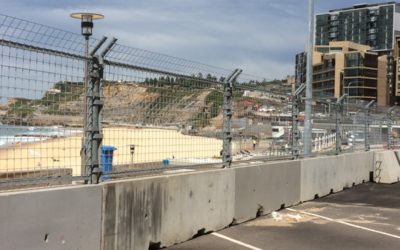 This article was published in the SUBSCRIBER-only section of the Newcastle Herald on 31st August 2019. It questions the CoN race review and demonstrates how the numbers were inflated.

END_OF_DOCUMENT_TOKEN_TO_BE_REPLACED

1. The Newcastle Herald revealed last year that there was a significant discrepancy in the attendance figures provided by Supercars for the 2017 event and those obtained from the Telstra data that was used for the evaluation by the Hunter Research Foundation (HRF) on...

END_OF_DOCUMENT_TOKEN_TO_BE_REPLACED 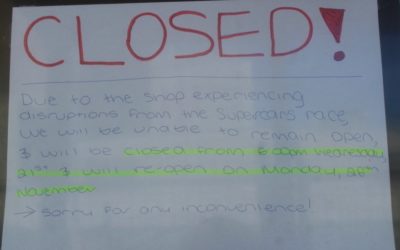 Prior to the first event in November 2017, Newcastle council passed a unanimous motion to: Engage an independent, expert third party to undertake an evaluation and event impact assessment to assess the social, economic and environmental benefits and costs associated...

END_OF_DOCUMENT_TOKEN_TO_BE_REPLACED 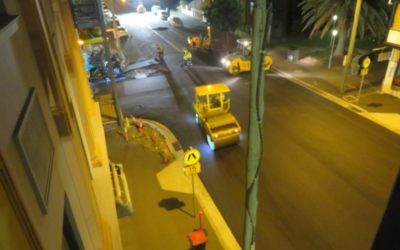 While suburban road projects stagnate and stall, the new roads constructed for the race must be resurfaced repeatedly at rate-payers’ expense. CoN has had to rebuild some sections of the track three times since the first race in November 2017.

END_OF_DOCUMENT_TOKEN_TO_BE_REPLACED

“A tree replacement program for the Newcastle Foreshore precinct aims to create a greener, more usable and more accessible public space for everyone to enjoy.” Well, just how is this greener and more useable public space coming along?