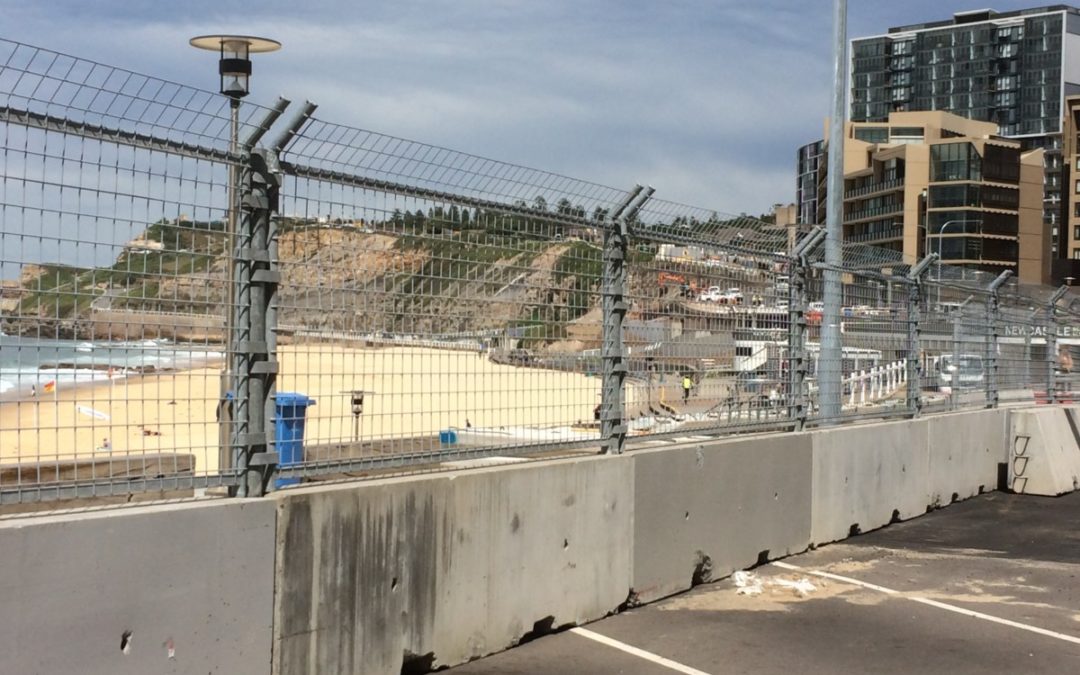 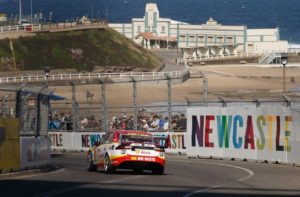 A Hunter Research Foundation Centre report into Newcastle’s first Supercars race inflated its economic benefits by 56 per cent, according to a retired University of Newcastle professor.
Janet Aisbett, a former professor of information systems, has written an analysis of a 2018 HRFC report which found visitors spent almost $9 million during the race weekend in November 2017.
Dr Aisbett lives in Newcastle East but is not opposed to the race. She has hosted family members from Queensland to watch the event in its first two years.
But she said the HRFC report had “grossly overinflated” the number of visitors in the city for the race because it had used the weekend of May 19 to 21, 2017, as a baseline “ordinary” weekend, when in fact the number of visitors to the city that weekend had been unusually low due to inclement weather. 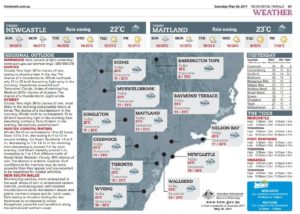 The Newcastle Herald’s weather page for May 20 and 21, the baseline weekend for the Supercars report.

HRFC director Will Rifkin, one of the authors of the report, wrote in an email, seen by the Newcastle Herald, to Dr Aisbett on August 2 that the May weekend “was not the choice of the HRF Centre”.
“We recommended another date. The May 2017 date was provided in the terms of reference for the project, nonetheless,” Dr Rifkin wrote.
City of Newcastle paid $156,000 for the report, including money spent buying access to bank and Telstra mobile phone data.
The report said in one instance that Telstra had chosen the baseline weekend in May.
“The visitor uplift is defined as the difference between visitor counts over the three-day race period and an ordinary three-day period, which for comparison was selected by Telstra to be in May,” the report said.
” … We estimate that approximately 82,600 non-resident visitors came to the Newcastle-Cooks Hill area during the three-day event on 24-26 November 2018.
“Of these visitors, 52,000 people were over and above the usual number of visitors, with ‘usual’ defined by an ordinary three-day weekend in May 2017.
“This figure represents a 170 per cent uplift on the ordinary visitor population.”
In another instance the report said the baseline dates had been “determined by CN in negotiation with Telstra prior to HRF Centre’s involvement in the impact assessment”.
Dr Aisbett said the stated May visitor figure of 30,000 was “abnormally low” due to the weather.
The report went on to base its spending estimates on the 52,000 uplift in visitor numbers.
The University of Newcastle, of which the HRFC is a part, said in a written response to questions that HRFC had completed its assessment “within the scope and terms of reference provided by the City of Newcastle”.
“We have been very clear about data sources and how calculations were done,” it said.
“Taking this transparent approach in the report itself allows others to do further ‘parametric’ (or sensitivity) analysis should they so wish.
“The methodology that we used was approved by the University’s Human Research Ethics committee.”
A City of Newcastle spokesperson said the council “stands by the report”.
“The Hunter Research Foundation Centre was chosen to undertake the review partly because of its international credibility and fierce independence,” the spokesperson said.
Greens councillor John Mackenzie slammed the 61-page report as a cynical PR exercise when it came before the council in October.
“Not a single cost was included in this analysis, and no attempt whatsoever has been made to quantify the value of the negative impacts of the event,” he said.
“This is woefully inadequate for any kind of evaluation. You can’t only assess the benefits and claim to have done a cost-benefit analysis, or even an impact assessment.”
The report said the 2017 Supercars weekend had contributed an estimated $30.1 million to the Newcastle economy, a figure it arrived at by adding visitor expenditure to Supercars expenditure and flow-on effects from both.
Lord mayor Nuatali Nelmes said last year that the report’s findings justified the council’s decision to host the race.

To read the full report click on the link below.