1. The Newcastle Herald revealed last year that there was a significant discrepancy in the attendance figures provided by Supercars for the 2017 event and those obtained from the Telstra data that was used for the evaluation by the Hunter Research Foundation (HRF) on behalf of Newcastle council. This discrepancy meant there could have been no more than 77 380 attending the event over the 3 days, rather than the 192 241 claimed by Supercars.
2. The attendance figures for 2018 obtained by NERG under the Freedom of Information Act continued to be greatly exaggerated. Observers could see that the numbers were significantly down on the previous year, so Supercars tally of 162 248 could not possibly be right, given the numbers estimated in 2017 (above).
3. Yet, while the attendance figures were down even according to their own calculations, the number of “unique visitors” (i.e. those that Supercars reported either bought a ticket or were issued with one) was significantly UP on 2017!
• 2017 66 440 unique visitors, 192 241 total attendance over 3 days
• 2018 82 904 unique visitors, 162 248 total attendance over 3 days

How did they manage this?
NERG learned from Freedom of Information that Destination NSW emailed Ticketek with a query:
“1. On the Transaction Detailed tab, nearly all are numerous duplicate entries under one name and there are rows with negative admit values. Can you please help clarify how this data should be interpreted?
2. Ticket prices range from $0 to $15.90, is this correct? Seems quite low?
3. Can we get the price Category Name and Price Type column data in order to categorise this information properly?”

Of course the reply from Ticketek is redacted, and while most of the Ticketek data we received is also redacted, there is enough information to see that most ticket prices are either $0 or under $12. We therefore must assume that Supercars manipulates their attendance figures. This is how they do it.
1. A significant number of additional tickets were given out in 2018 to:
• 1 460 extra Corporates
• 12 051 Guests and VIPs series passes
• 2 548 extra businesses and residents

2. Supercars breakdown of the interstate numbers is in response the problems we raised in our book, Wrong Track, where we pointed out that even though their interstate visitor estimation before the event was 16 000 only 9 382 were issued with tickets in 2017.
In 2018, interstate visitors grew from 9 382 to 12 627. The ‘growth’ came from unbelievable increases in team and staff numbers from interstate.

The number of local/regional caterers and merchandise vendors dropped considerably in 2018. Supercars were keen in the inaugural year – with a council evaluation due – to show that the money made by their caterers and merchandise vendors was going into the local and regional economy (although Supercars takes up to 40%). However, in 2018 the number of local food vendor personnel dropped significantly from 890 to 196, although the interstate number of food vendor personnel rose. Local and Regional merchandisers also dropped considerably in 2018.

Overall Supercars claimed more interstate visitors in 2018 than in 2017 by boosting the numbers of team/staff/corporate/VIPs and guests and series passes, and there were significantly fewer local and regional caterers used.

Yet they also managed to attract more ticket sales from the Hunter and NSW.

Voodoo economics indeed!
Questions still outstanding from discrepancy in 2017 figures between Telstra and Supercars data
Council asserted only they and the HRF had access to the Telstra data:
“There were conditions around the use and distribution of the data under the purchase agreement with the information provider. This information was only provided to the City’s contractor involved in the development of the report, and approval was obtained for the information to be included in the final report. This data has not been provided to any other external party.“

The question is then, how did Supercars get attendance figures immediately after each day of the event that were almost identical with the Telstra data, and why didn’t council call them out for misusing these figures as attendance data, when the figures were not for the event space but for the whole Newcastle-Cooks Hill Government Area?
Fig 1: 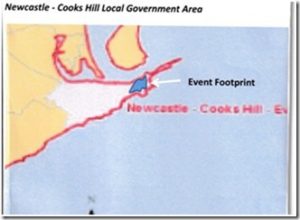 The majority of businesses in Newcastle CBD and residents in Newcastle East continue to bear the brunt of the impact of this event – an event justified by the “visitor uplift” and the expenditure these tourists would bring to the city. Under the terms of the Newcastle Motor Racing Act, local businesses and residents do not receive any compensation for any negative economic impact. However, we now know these figures have been significantly inflated. Questions remain:

1. In 2018 Supercars continued to use attendance figures that could not possibly be true. Neither Newcastle Council nor Destination NSW called them out. Why not?
2. Destination NSW published Supercars attendance figures in their Annual Report and used almost identical figures to those derived by the HRF as their “visitor uplift” (20,500/20,600.) However, an analysis of the assumptions underlying the HRF report, conducted by Dr Aisbett* this year, reveals how the visitor uplift and expenditure benefits used in the HRF were overstated by an extraordinary 56%.

How did DNSW come by their figures? Why do they continue to publish Supercars own attendance figures when it is now obvious they are significantly overstated? As the Authority for this event, why doesn’t DNSW require Supercars to present them with scanned figures of actual attendees, rather than tickets issued which can be so easily manipulated?