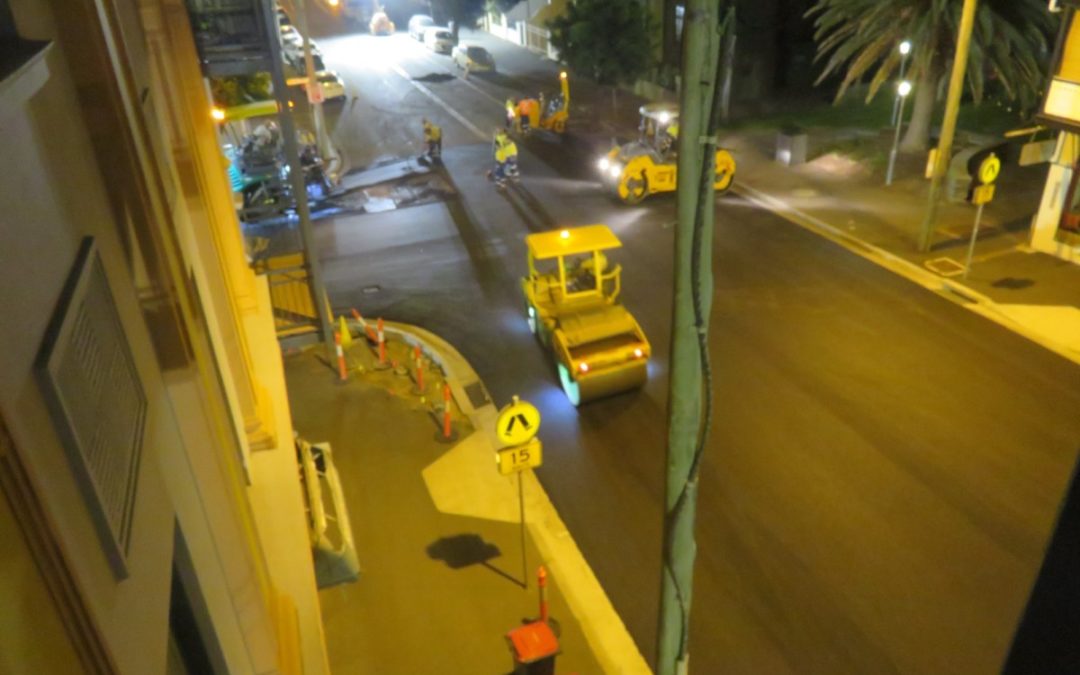 Just 16 months after the new roads were installed for the initial event, CoN began major repairs to fix damage caused by the racing cars. Despite ratepayers being told that the roads would be world-class, they began to break up on the second day of racing, and hurried repairs were done each night in preparation for racing the next day.

In early 2019 repairs to the new roads began in earnest. These included digging up the footpath corners and replacing them with cement, re-alignment of road camber, milling, excavation, placement, compaction (including vibration), road resurfacing and the removal and replacement of round-a-bouts, crossings and islands on the road. Residents received notices informing them of night works (5.00 pm until 6.00 am) would be carried out on 24thand 25thFebruary. Further notifications informed of nightworks (2:30 pm until 6:00 am) on 26th, 27thand 28thFebruary. In order to complete the works, CoN had to remove resident street parking signs and replace them with clearway signs for the duration of works. Workers and residents caught unawares, had their vehicles towed away. Without notification, clearway signs appeared on the Esplanade for road works on 3rdMarch to the 6thMarch during the hours of 5:00 pm until 6:00 am. Traffic islands were removed in preparation. Again without notice, the clearway signs were removed and resident parking was reinstalled, along with the traffic islands. This is an extraordinary waste of time and money…rate money.

The Zaara Street ‘track’ was resurfaced and dug up THREE times from 8thFebruary until 4thMarch!

Initial works for the track in 2017 were officially described as ‘works brought forward’. CoN claimed they were always going to be done at some time in the future. Yet, some of those roads had been renewed just 18 months beforehand. The road through the parklands and the entry and exit areas to pit lane, cannot fall into the category of ‘works brought forward’. These are specific only to the race.

Nor can the tree felling, relocation of heritage structures and the annexation of portions of Fletcher Park, Fort Scratchley Reserve and Foreshore Park.

In relation to 2019 roadworks, the oficial CoN line was: standard maintenance works as per the roads program. These works have no associated (sic) with any agreements around the Newcastle 500, outside of the timing to ensure that there is no impact on the annual event.

Is it just coincidence then, that the ‘maintenance’ is exclusively restricted to the turns on the public-road-turned-racetrack? And if this IS just a part of normal maintenance, why is the turn at the end of the non-public road (only used during the race 3 days per year) being resurfaced? If these roads have to be ‘maintained’ after 16 months, what does that say about the quality of the initial work? Should those contractors be footing the bill?

We know that CoN must comply with the secret service deed as follows:

k) Regular (and at least, annual) maintenance and upgrading of all roads within the Circuit, at the direction of and as required by V8SCA.

Are there any other roads in NSW that have been renewed so thoroughly  and so often for ‘normal’ maintenance?

The roads were constructed in September 2017, repaired with epoxy during the 2017 event, those areas repaired again in October 2018 and large sections including most corners, milled and resurfaced yet again in February/March 2019.

While suburban road projects stagnate and stall, many rate payers in Newcastle have voiced outrage at this work being prioritised over other city roads in much worse condition. Meanwhile, the true costs to ratepayers for this 2.6 km stretch of road is buried in CoN’s ‘road maintenance’ budget.